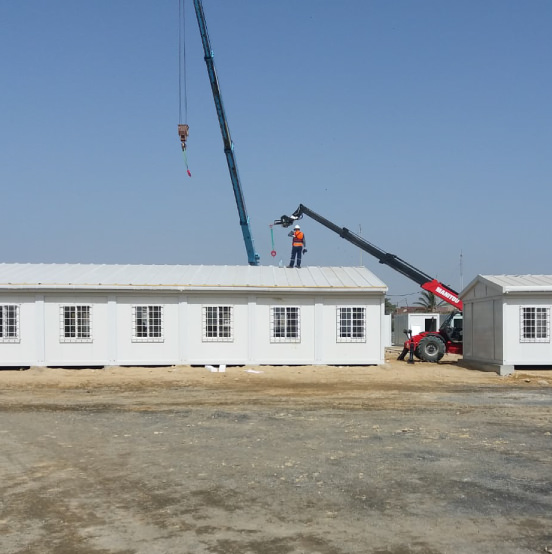 Delivery of prefabricated buildings in Senegal

Module-T shipped and supervised the assembly work of nearly 3500m2 prefabricated buildings and containers in Dakar Port, Senegal. The prefabricated buildings are intended to provide workspace for more than 400 workers. The outer walls of the modular buildings are made of sandwich panels with very high galvanized steel surfaces and 100mm thick Rockwool insulation. The camp consists of large two-story office space, a refectory building with kitchen space, a set of prefabricated containers that will serve as a cloakroom, shower, and sanitary.

Module-T is headquartered in Istanbul, Turkey, and provides prefabricated buildings all around the world. Our company specializes in supplying the highest quality prefabricated buildings at competitive prices with professional support to meet your specific workspace needs. We pre-fabricate your order in our factory and ship it to you for easy on-site assembly which reduces the expense and time delays of traditional construction. We offer a variety of prefabricated containers (office, accommodation, sanitary, locker, guardhouse, kiosk, etc.) to create worksites that meet your requirements. As a Turkish producer, Module-T provides a full range of assistance from architectural and engineering services to the final touches of your interior furnishings.

GET A PRICE OFFER

Prefabricated buildings, sometimes called “ prefab buildings ” or “ temporary buildings ’’, are structures that are largely built off-site. Prefabricated constructions are often used as portable offices and workspaces for professionals such as construction workers working in remote areas.

One of the most important advantages of temporary buildings is the time-saving construction technique. Prefab buildings can be formed according to the desired plans and projects, constructed on concrete foundations at any size and they do not contain any factors that cause environmental pollution. These structures allow the change of the parts that are discontented according to the demand. Another advantage of temporary buildings is the wide range of preference for roof and wall covering materials. Parts can change place without depending on any plan or project.

Our expertise is at your service for your projects in Senegal

MODULE-T, specialized in the design and manufacture of modular and prefabricated buildings, has developed efficient and economical solutions for your projects in Senegal and Africa in general. We offer quick solutions that can be installed without breaking your civil engineering, materials handling and maintenance budgets. We provide solutions for creating modular offices, dormitories, construction sites, administrative buildings, modular schools and all temporary or permanent projects requiring a quick turnaround.

Turkish specialists in modular construction, we have more than 25 years of experience in this field, and we ship our products to more than 120 countries. Whatever the challenges of your project, our design office will find a quick, economical solution. The choice of materials will be made in accordance with

Need a quote for a prefabricated modular building to be used as an office, dormitory or onsite locker room? Whatever the size of your project, whether it’s a large multi-level modular building or a simple prefab modular container, our team will be happy to work with you to successfully complete the installation of your building in Senegal or anywhere on the African continent.